Sensing cancer before it’s too late Blue plastic bins of metal rods and black plastic posts line the basement walls. Drawers of a red metal tool chest are labeled wrenches, abrasives, string and scissors. Down a narrow corridor, long black curtains surround tables that look like metal pegboards. Reminiscent of Tinker Toys, each board forms a base for one of the world’s most powerful microscopes. Those rods and posts, screwed into the pegs, construct the skeleton of this microscope — Vadim Backman’s landmark achievement. That is, until he finds a cure for cancer.

A new kind of microscope

Like all of Backman’s work, this super-powerful microscope began with a mathematical equation. To an untrained eye, these elaborate equations look like a random array of numbers and Greek letters filling a wall-sized white board. But to Backman, a biomedical engineer who has been singularly focused on cancer for over 14 years, these equations signal a paradigm shift in cancer diagnosis and treatment.

“Cancer is not what goes wrong in the body — it’s just a side effect of normal physiology,” Backman says. “If cancer cells don’t have the right metabolism to survive, they change their metabolism. They learn how to use your blood supply. They figure out how to metastasize. Then we give them chemotherapy, and they learn how to evade that. Cancer cells are masters of survival.”

This survival, Backman says, depends on chromatin, tiny bundles that house genetic information within cells and regulate which genes get turned on and off.

When Backman first began looking into chromatin, he realized there was no way to visualize its structure, also called chromatin packing. Conventional technology can only image structures larger than 200 nanometers, and changes in chromatin are between two and 200 nanometers. If Backman’s team wanted to study chromatin, they needed a new tool.

“We didn’t set out to develop new imaging,” Backman says. “We just wanted to understand the ‘software of life.’ But once we started developing imaging, and learning more about chromatin structure, the idea of using chromatin for cancer diagnostics really came to be.”

“So, think of it as looking at the sky,” Backman says. “You can look at the sky on clear day and see the color is blue. And you can say that it means there are no water particles — just air molecules. Then you look at a cloudy sky and you see lots of clouds and they’re white, and you say that’s because there are a lot of large water droplets. You’re essentially sensing. You don’t see water droplets, but you know they’re there.”

A pap smear for other cancers

Once Backman and his colleagues developed this new approach to imaging, he also took a new approach to cancer detection. Most diagnostic technologies examine secretions from cancer itself, and Backman knew tools like these would inevitably come up short.

“These diagnostics are looking at byproducts of cancer, and the fundamental limitation is that the bigger the tumor, the more it’s going to produce whatever the diagnostic aims to detect,” Backman says. “We see the same story unfold every time: A test seems to work for large cancers, but then it’s irrelevant because you don’t want to detect late-stage cancer.  You want to detect something early and treatable. But as soon as you look at pre-cancerous lesions, or small but aggressive cancers, tests start to fail.”

With this in mind, Backman and colleagues decided to leverage the unique capabilities of PWS to look not at byproducts of tumors, but at what gives rise to tumors in the first place.

“That was a fundamental difference,” he says, and it meant that even small tumors and pre-cancerous lesions could be detected.

Backman and colleagues knew that the development of cancer — or carcinogenesis — begins with “field effect”: A region of the body, near to where the cancer will develop, undergoes changes in its chromatin structure. Over time, cells with altered chromatin accumulate mutations, and one of them may explode into a tumor. 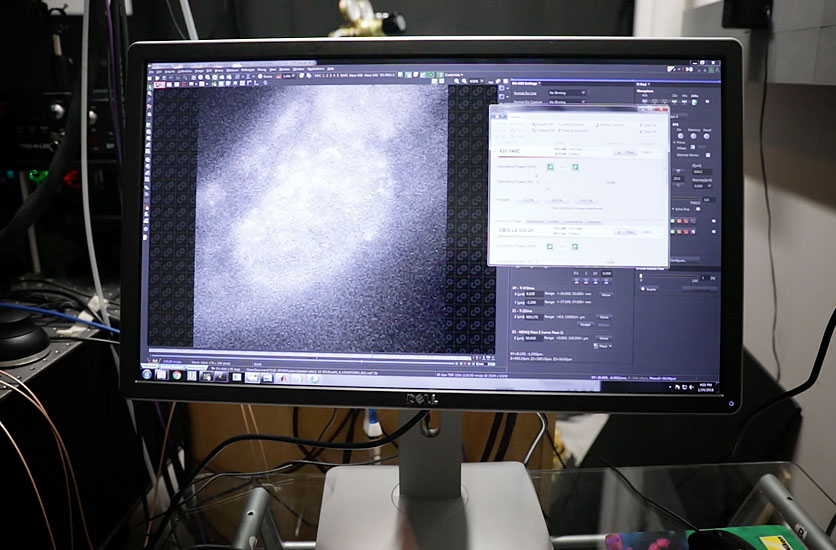 Before PWS, there was no way to observe these nanoscale-level changes, but Backman’s imaging technology made it possible to “sense” these changes in chromatin near the eventual cancer site.

Backman believes that his diagnostics could serve as an initial screening – like the pap smear, but for other cancers – before more invasive and costly CT scans, colonoscopies or other screenings.

“It’s almost like where we are right now — we know the types of cancer, the malignancies — is where we used to be in the 1950s for cervical cancer,” Backman says. “We have colposcopies; we don’t have pap smear.”

As he moved forward in his diagnostic work, Backman was surprised to learn that the “field” of the field effect was fairly large.

Backman and colleagues have brought this technology into clinical trials for both lung and colon cancer, which are two of the most prevalent cancers in the U.S. In five years, Backman hopes a cheek swab screening for lung cancer’s precursors will be part of your annual checkup.

“I would consider it a failure if we don’t have it in five years,” he says.

A way to overcome resistance

In addition to using cellular changes as a signal for oncoming cancer, Backman realized, these changes in chromatin structure could also be used as a therapeutic target — one that could revolutionize cancer treatment across the board.

Using PWS, Backman’s team examined chromatin packing and found that, early in cancer formation, chromatin looks messy inside cells. The lack of a structured chromatin arrangement allows these cells to turn genes on and off — changing gene expression —relatively quickly.

This messiness isn’t always a bad thing. In fact, it’s critical for species to survive.

“This chromatin packing code allows organisms to respond to external stresses, which, evolutionarily, we have been bombarded with forever,” Backman says. “Chromatin allows you to change gene expression very quickly — within minutes — and adjust to these stresses so that your species can survive long enough to have gene mutations.”

Cancer is the downside of that adaptability, “a side effect of us being able to stay alive,” Backman says, “which is precisely what makes it so hard to defeat.”

With this in mind, Backman set his sights on attacking cancer’s ability to adapt. “We block the only thing that cancer cells actually do well,” he says. Backman targeted the very structure that tells cancer how to resist treatment: chromatin.

With the help of chemist Tom O’Halloran, Backman identified two existing drugs, neither of which kill a single cancer cell. Rather, these drugs restructure chromatin in such a way that cancer cannot adapt and survive when attacked with powerful chemotherapy. Backman calls them CPTs, or “chromatin-protection therapeutics.”

Not only could these CPTs be used to cripple cancer in a way that today’s cancer treatments never could, but they could also make treatment more tolerable.

“We reduced the dose of chemotherapy 1,000 times — a dose that, by itself, would not be effective at all — and we combined that with the CPT compound. We were able to kill about 90 percent of the cancer cells,” Backman says. “Cutting chemotherapy by half or ten times — while still causing major damage to the tumor — would completely change how patients react to chemotherapy, because side effects can be just as bad as cancer itself.”

Backman has now linked up with Shohreh Shahabi, chief of the Division of Gynecologic Oncology at the Feinberg School of Medicine, to test CPTs in ovarian cancer, a prevalent cancer with an extremely high mortality rate and few options for patients. For Backman, getting his work to patients’ bedside is all that matters.

“This isn’t about accumulating of knowledge for me,” he says. “It’s not about publishing another paper or getting coverage or getting grants. It’s really about — I would be really happy to save one patient.”

Vadim Backman is the Walter Dill Scott Professor of Biomedical Engineering at the McCormick School of Engineering and Applied Science. He is also a professor of medicine in oncology and biochemistry and molecular genetics at the Feinberg School of Medicine. Backman is program leader in cancer and physical sciences at the Robert H. Lurie Comprehensive Cancer Center and a member of the Chemistry of Life Processes Institute.